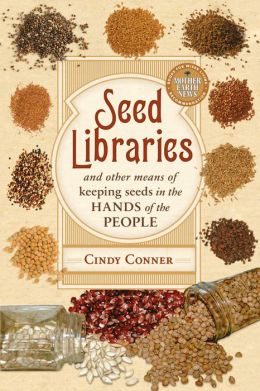 I recently got a very exciting book in the mail from a woman named Cindy Conner entitled Seed Libraries And Other Means of Keeping Seeds in the Hands of the People. I’m a character in the narrative of her story, the young urban farmer who has the idea to start the first seed library. It’s a true story, I was the one who was full of fire to make it happen and organize my community, and honestly I’m really proud to have played a role in the birth of the seed library movement. It was Chris Shein‘s seeds, but I was the one that connected the dots and started talking to groups of people about the relationship between biological and cultural diversity and building links between the urban and rural folks. I’m the one that convinced the Ecology Center to be our fiscal sponsor and house the library and then I went up and down the west coast meeting all the seed farmers I could in the pre-internet organizing years and developing the strategy for the first generation of seeds and their propagation.

One of the part’s of the story that’s so interesting is that by western psychiatric standards I was “crazy” while I was doing it. It was the same visionary seed library fire that ended up sending me over the edge and getting my bipolar ass locked up in LA County Jail for a month when I couldn’t stop burning. I knew I was doing something important but I went too far and stopped sleeping and started thinking the revolution was happening. Instead of being part of the movement I helped inspire, I dropped out early and started The Icarus Project.

How many visionary people try to change the world but aren’t grounded enough to hold their dreams together and end up in the psych ward instead? That was one of the big questions we asked ourselves in the early years, and reading through this book about the seed library movement brings it all back to me.

I wonder sometimes what I would have ended up doing if I hadn’t gotten locked up that winter of 2001 and my life hadn’t been derailed by madness. There’s a decent chance I would have followed my dreams of doing international solidarity seed work with farmers in Mexico and Central America. Maybe I would have settled down on a piece of land somewhere out West and become a seed farmer myself. I still have dreams about seed kale crops and the Applegate Valley of Oregon.  Instead I live in Brooklyn and I’m 40 years old and immersed in the battle to change society’s conception of mental health and illness, to create new tools for people to take better care of each other, to build the social justice movement we need to actually change the mental health system. The only seeds I plant these days are ideas in people’s minds.

But it is amazing to watch a dream I had as a young man become a growing reality. As of writing this post there are over 410 seed lending libraries open in 46 states and 15 countries! Everyone knows that Rebecca Newburn is the real mother of the seed library movement because she came up with a replicable model for the public library system and is a spectacular organizer and inspirer of people large and small. But I’m happy to take my little cameo’s worth of credit for the idea, for excitedly pushing it forward when no one else was talking about it. I was a pretty bright and wild 24 year old. I hope having my story connected to the seed library movement’s founding helps keep the movement wild and connected to larger visionary social justice struggles.

This is from an article called

“The seed library story begins, appropriately, with a rebellion. In late November 1999, thousands of anti-globalization activists descended on Seattle to protest a meeting of the World Trade Organization. The massive demonstrations shut down the city for days. Sascha DuBrul, a 24-year-old activist and New York native living in Berkeley, took part in the protests and returned to California charged with excitement. “It was a really vibrant time,” he recalls. “Here in the Bay Area, there were all these amazing projects starting up that are still around.”

Seeds were DuBrul’s newly discovered passion. While interning at a CSA farm in British Colombia the previous year, he became fascinated by the invigorating genetic relationships that arose when domestic crops intermingled with their wild relatives. Diversity was the key to the health of a community, he realized, be it plant or human. This idea had great relevance to urban spaces where people live in close quarters but thrive on cultural differences. “I had this vision of articulating the relationship between biological and cultural diversity, and bringing that idea to kids in the city,” says DuBrul.

That opportunity soon came following a Faustian deal between the University of California at Berkeley and the Swiss agribusiness giant Novartis. One of the first decrees under the alliance was for the eviction of an on-campus CSA farm to make way for trials of genetically modified corn. “There were all these seeds left over in a cabinet and nothing was going on,” recalls DuBrul. “So I thought, Hey, why don’t we start a seed library?’ We
could have a collection of seeds that people can take out, and then have regular seed saving workshops where gardeners can come and learn the basic techniques.” He started brainstorming with his friend Christopher Shein, who had been running the Berkeley campus CSA. Their vision quickly blossomed into the first seed lending library: the Bay Area Seed Interchange Library, or BASIL.

DuBrul counts an unlikely pair of inspirations behind the BASIL project: Gary Paul Nabhan, co-founder of Native Seeds/SEARCH and father of the local food movement, and the Black Panthers. “Reading [Nabhan’s] book Enduring Seeds rocked my world,” he says, “and the Panthers had this history of community-controlled movements where people took over their communities for their own.”

Here are my cameo’s in Cindy Conner’s book entitled Seed Libraries And Other Means of Keeping Seeds in the Hands of the People.

“The first seed library to form was BASIL—Bay Area Seed Interchange Library—which began in 2000 at the Berkeley Ecology Center in Berkeley, California. BASIL is sponsored by the Ecology Center and run by volunteers. Sascha DuBrul came up with the idea of a seed library as a result of wanting to find a home for seeds that were left when the University of California Berkeley closed the campus farm. The property was to be used for cooperative research with Novartis, a Swiss biotechnology corporation. Christopher Shein, manager of the CSA (Cooperative Supported Agriculture) at the closed farm, and Terri Compost, worked with DuBrul to establish the seed library.”

And then at the end of the book in the chapter “Where are they now?””

Sascha DuBrul is the young man I mentioned in Chapter 1 whose idea it was to start the first seed library in Berkeley; then he moved to upstate New York and influenced someone to start one there. He had a case of wanderlust, a diagnosis of bipolar, and a penchant for activism that kept him moving around for years. DuBrul is not satisfied with how mental health is handled by the establishment meant to deal with these things and feels that much more can be done for treatment besides passing out medication. To that end, he is the co-founder of the Icarus Project, a radical community support network and media project that’s actively redefining the language and culture of mental health and illness. He has written his autobiography, Maps to the Other Side: the adventures of a bipolar cartographer and, through the Icarus Project, published Navigating the Space Between Brilliance and Madness: a reader and roadmap of bipolar worlds. He is one of the writers for Mad in America, a website designed to serve as a resource and a community for those interested in rethinking psychiatric care in the United States and abroad. DuBrul sees a mental condition that differs from the norm as a gift that needs to be understood. We are living in changing and exciting times. We need people who can think beyond the current conditions and come up with new ideas to lead our society to a peaceful welcoming future. Just maybe, Sascha DuBrul and those like him, will show us the way.