Fireworks Are a Celebration of the Beginning of the World 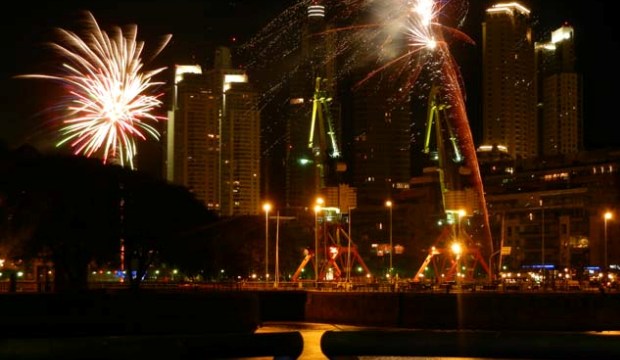 At midnight I was breaking bread and drinking wine with a group of radical veterans who’ve been living in a small shantytown in La Plaza de Mayo since 2008, in protest of not receiving their benefits after fighting in the Falklands war back in 1982*. I was just biking through the New Years Eve streets of Buenos Aires with my clunky one speed orange bicycle looking for someone to talk to or dance with or something or anything! The streets were so quiet and then suddenly I found myself at La Plaza de Mayo, the infamous plaza that Las Madres de los Desaparecidos (The Mothers of the Disappeared) boldly and bravely protested in during the dictatorship in the 1970s after their sons and daughters were “disappeared” (tortured and usually murdered) by the fascist military government that was being directly supported by the United States (30,000 leftists were murdered by bands of thugs that set up concentration camps all over the country – can you imagine that happening in the US or what the aftermath of it might be for the population?) 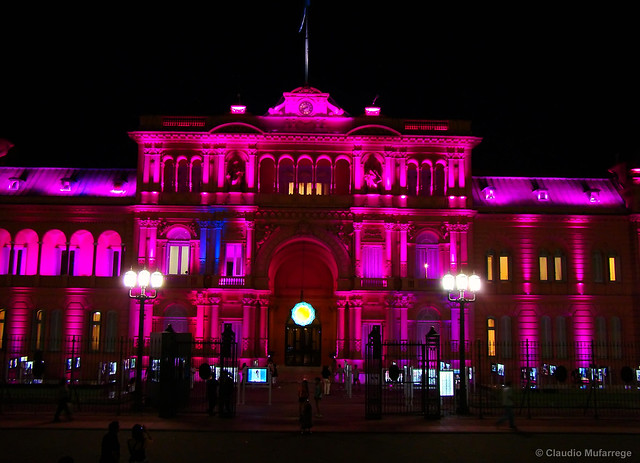 It’s actually a beautiful plaza, surrounded by old buildings, and the “Pink House” all lit up where the President of Argentina works. Antonio was the first one to say hello and invite me over. Middled aged with a salt and pepper beard, and a sweet smile. Their camp was literally covered in blue and white Argentian flags with big signs that said “We Will Not Be Forgotten.” I asked him what they were doing there and he explained they were protesting the fact that the government hasn’t given the veterans benefits even though they were sent off to war as young men. The police don’t kick them out of the park because of popular support but they after all these years they haven’t given into their demands.“That sounds familiar, that’s what happens in my country too.” “We’ve had a lot of visitors over the years who were Vietnam Veterans.” So many veterans ignored and forgotten. 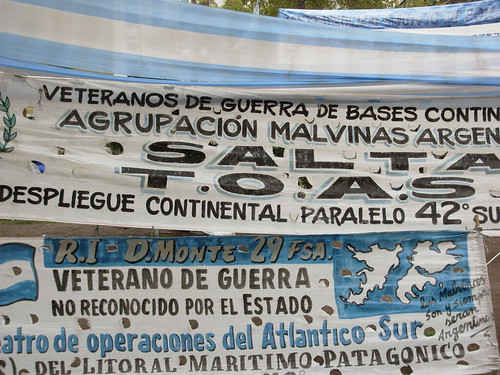 Folks invited me into their tent circle and we broke bread. The shantytown reminded me of Occupy Wall Street camps or the homeless encampments in Tompkins Square or People’s Park of my youth. I always feel comfortable in spaces where people are consciously occuping and carving room for dialog in the context of protest. There were about a dozen people hanging out eating bread and pizza and drinking coca cola and red wine. From what I’ve heard Argentina has had such an enormous popular struggle over the last 14 years and it’s hard to tell right now on the surface as a foreigner visiting for the first time, but this camp is a small piece of that on the ground social movement. And it feels good. Half of them veterans and half of them folks from different parts of South America like Brazil and Chile.

Nicolás had dark skin and bright eyes and we sat under flourecent lights and he talked about the corruption and distance the politicans have from the people. “The ones in power have no sense of the reality of how people live out here in the streets. Every morning the city comes and picks up three or four new dead people that have died in the streets overnight, every night the garbage pickers come out from the favelas and scrape out a living from the trash around this neighborhood. There is so much wealth and so much poverty. So much struggle.The elites of all the countries only support each other and the great majority of us are out here fighting for our lives.”

“I don’t understand why the governement doesn’t just kick everyone out of this camp.” I said. “Where I’m from they would never allow protesters to stay for seven years in the main central plaza. Right now there’s a powerful struggle going on in the city where I live protesting the abuse from the police and fighting for the rights of Black people to not be constantly assaulted. There’s the birth of a new civil rights movement happening where I live.”

“The reason they haven’t kicked up out, comrade, is that we have enough popular support. The governement fears the retaliation and anger if they mistreat us.”

“So your government is actually fearful of the power of the people.”

At midnight we toasted each other “feliz año nuevo!” and hugged and kissed ( I love that the men kiss each other on the cheeks here!) I bid my new friends farewell.

I biked through the city to the water and watched the fireworks with a big grin on my face, feeling the camraderie of strangers. Especially when I’m spending lots of time alone, I can literally feel the way I’m nourished by the company of others. It’s tanglible. It’s like being connected into an invisible network that spans the planet. Sometimes I can conjure it when I’m alone, sitting and meditating. But I can get a heavy dose of it when I’m eating food with people or in the streets at a protest, dancing, something where I’m doing something which a bunch of other people.

This is a sweet way to start 2015, alone in tiny hostel room so far from home, sweating at 3am once again, but really content with my little place in the universe, my traveler status in a wild world full of adventure. I work so fucking hard, I work relentlessly on the things I care about, so much so that the people closest to me sometimes worry about my health. Sometimes I feel the edge of burnout myself, like I have an engine that burns too hot, that I don’t always know how to cool myself down, how to relax. How to chill.

Find a group of people you like to hang out with and have more fun.

Hang out with your awesome housemates. Invite people over to your house for parties and dinners.

Make a really nice garden in the backyard. Start figuring out where the soil’s going to come from now.

Pour a bunch of heart and soul into developing the Icarus Advisory Board and the Mad Maps project and the Decoloniation process. Relish the fact that you seemingly are pulling off an incredible dream.

2015: The year you really organized your contacts. Reach out to all the people that matter to you in really creative ways. Give old friend’s excuses to talk to each other.

Recognize that you have a big hole in your heart where family is supposed to be. Use that pain and anguish to make the chosen amily you want to have.

Figure out how you’re going to heal so you’re not so scared of getting close to other people.

Forgive yourself for not knowing how to do it yet.

Have a really awesome and complicated relationship with your new therapist.

(*Randomly, I know a lot more than most North Americans about the Falkland’s War between Argentina and the United Kingdom because I listened to a lot of British anarchist punk records from the early 80s when I was a teenager and there are so many protests songs about it!)

Argentine Falkland Veterans
Plagued By Suicide
Many of Argentina’s 12,000 Falkland veterans were only students when sent to war by military dictators and have since returned to impoverished, remote provinces where they have no access to psychiatric treatment.
“What we are demanding is a health plan that befits a war veteran, a dignified war pension … recognition by the state and economic compensation for the past 22 years,” said veteran protest organizer Martin Borbad.